How the amazing electronic compass was developed.

A tiny electronic compass inside every smartphone points the map in the right direction for easy navigation. Dr. Masaya Yamashita made it possible, leading the planning and development of the device, and expansion of the business. 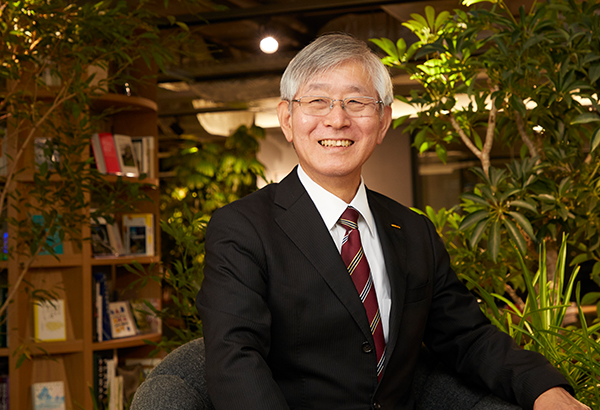 Born in 1955 in Okayama Prefecture, Japan, Yamashita received a Doctorate of Engineering in Applied Physics from the University of Tokyo in 1982, and joined Asahi Kasei. After working in the development and commercialization of MRI machines and lithium-ion batteries, he began developing electronic compasses in 2000. Following commercialization in 2003, Yamashita contributed to market growth establishing Asahi Kasei as the leading supplier. Asahi Kasei’s electronic compass became standard in Android smartphones in 2008 and iOS smartphones in 2009, and the business grew rapidly. Yamashita became Asahi Kasei Group Fellow in 2010 (currently Senior Fellow), and received the Imperial Invention Prize of the National Commendation for Invention in 2012, and the Medal with Purple Ribbon from the government of Japan in 2015.

The true value of our electronic compasses: growing into a world-leading business shipping 600 million devices annually

Electronic compasses are indispensable for smartphones. Pedestrian navigation systems on smartphones, showing your current location and the direction you’re facing, make it easy to find your destination. Electronic compasses are functional electronic devices which not only use magnetic sensors to detect the geomagnetic field like traditional compasses, but also calculate azimuth angles.

To detect the subtle geomagnetic field, we use low-sensitivity Hall elements in our electronic compasses. This may seem counterintuitive, but things like speakers generate magnetic fields inside the phone stronger than geomagnetism. So I thought Hall elements with low sensitivity would work best for electronic compasses, since they won’t saturate even when installed close to strong magnetic sources.

Another feature of our electronic compasses is that they aren’t simple electronic devices. Ever since the start of development, we designed them to be incorporated with software for automatic adjustment. Our patented technology enables automatic compensation for magnetic offset caused by external magnetic disturbance by utilizing the natural movements of smartphone users. This innovation has been called the forerunner of IoT. 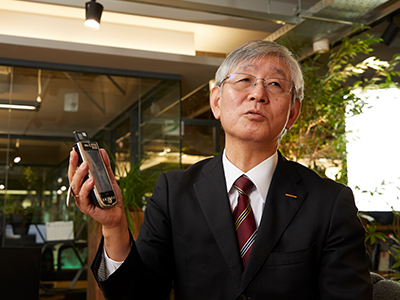 Seeing is believing: nothing is more persuasive than a functional demonstration

One peculiar thing about the electronic compass is that before determining its specifications, we created a demonstration device, presented it within the company, obtained approvals for development, and performed technical marketing for about a year. We visited all the handset makers in Japan for demonstrations, and only then did we determine our aggressive specifications for the world’s first 3-axis electronic compass combining magnetic sensors with a digital interface. Our electronic compass became standard equipment on Android smartphones thanks to our specifications that allowed new functions and apps that users find to be of interest and value to be created by analyzing user behavior. 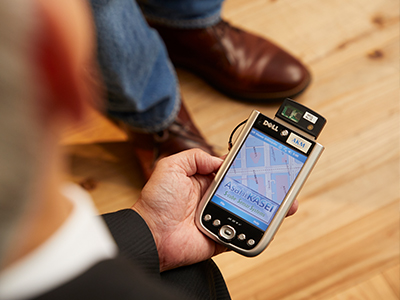 If you dare to leap, new horizons come into view

The key for successful development of the electronic compass was the idea to combine totally different technologies. Although electronic compasses are based on material technology for Hall elements as magnetic sensors, from the outset we combined this with technologies for software and services that wouldn’t ordinarily be part of the development process. It’s crucial to be able to integrate far-removed technology fields, not just nearby fields.

Of course performance enhancement and quality improvement are needed, but just pursuing them in the same direction might lead to a dead end. There’s a limit to what can be done if you stick to a single field of technology and a single standard of value. Engineers tend to focus on deepening expertise in their own specialized field, and to avoid fields based on different concepts. But it is by combining totally different fields that we can creates new opportunities. If you combine 3 or more fields that are so different that the specialists can barely understand each other’s terminology, a quantum leap is bound to result, precluding imitation by other companies. Don’t just follow concepts along a continuum. If you dare to leap, new horizons will come into view. Suddenly you will see ahead more clearly. My advice is don’t just solve the problems that appear in front of you, but take an objective look at the big picture, think of what goal you want to reach, and identify what problems need to be solved in order to achieve that.

These days engineers can get nearly the same level of education almost anywhere. It’s hard to stand out by deepening one’s knowledge in a certain field. Asahi Kasei has many employees who are interested in different fields. There is great potential to freely combine dissimilar technologies. The Asahi Kasei Group has a wide range of unrelated businesses, so when someone comes up an idea, we can get new concepts by bringing others together from different fields at an early stage. This creates many new opportunities.

If you want to set up a big project beyond what a single individual can do, it’s best to use a company or an organization that already exists. That is one advantage big companies have. It’s an amazing feeling when hundreds or even thousands of people are working toward the same goal to overcome a challenge together. That’s what keeps me motivated. 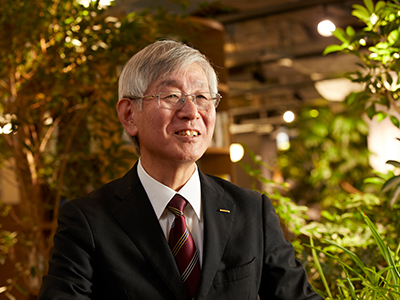 MY Lab Forum for free discussion among various members

I launched the MY Lab (Masaya Yamashita Laboratory) Forum which brings together diversified technologies and various human resources in order to study how to make ideas more flexible, unconstrained by convention. Currently some 1,400 Asahi Kasei employees have voluntarily joined the forum without being told to. they are working on themes such as designing the process of inspiration, creating new businesses by combining in-house technologies, utilizing in-house technologies to start businesses outside of our company. The members with various backgrounds freely interact with one another in a stimulating environment with each one considering how to provide value to the world. MY Lab Forum is a hub of creativity which emerged from the Asahi Kasei culture of diversity and inclusion, with various individuals getting together, recognizing each other’s different strengths, and leveraging one another.