Notable examples of Asahi Kasei products and processes used throughout the world.

We are the world's leading electronic compass manufacturer, with a dominant market share.

Pedestrian navigation systems on smartphones rely on an electronic compass that tells you the direction you're facing and enables the map to rotate as you turn.

There are three main features of our electronic compass: 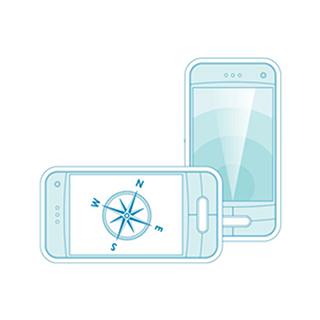 Asahi Kasei developed S-SBR for fuel-efficient tires by using polymer modification technology to add a special molecule that chemically bonds to silica at the end of the rubber molecules. This technology enables silica to be efficiently dispersed and tightly bound to the rubber molecules, resulting in a dramatic increase in fuel-efficiency without impairing braking performance. 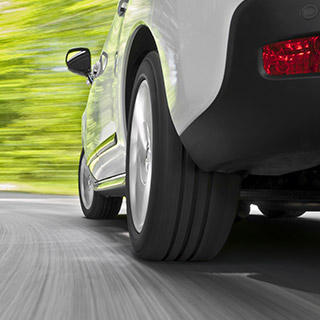 Therapeutic apheresis products from Asahi Kasei use membrane separation and selective adsorption technology to enable the treatment of many intractable diseases that can't be treated using drugs.

"Apheresis" is derived from the Greek word for "to take away." Therapeutic apheresis is used to treat a wide range of intractable diseases, such as autoimmune diseases including rheumatoid arthritis and ulcerative colitis, neurological diseases, lipid disorders, and chronic hepatitis C. Blood is drawn from a patient and circulated through a medical device that removes pathogenic substances by separation or adsorption; the treated blood is then returned to the patient. Therapeutic apheresis is the only treatment option in many cases where there is no safe and effective drug, or where side effects are contraindicative, and is increasingly used in the field of preventive medicine.

Asahi Kasei's world-class membrane separation and selective adsorption technologies, using hollow-fiber membranes, nonwovens, and other advanced materials, enable the production of a wide range of therapeutic apheresis devices for the treatment of a variety of conditions. Examples include the Plasmaflo™ separator for plasmapheresis, Cellsorba™ leukocytapheresis column, and the Immusorba™ immunoadsorption column.

The Hall effect is the generation of an electrical voltage perpendicular to a magnetic field. It was discovered by Dr. Edwin Hall in 1879.

The Hall element is a magnetic sensor that uses the Hall effect to detect magnetic fields, with the strength of the output signal varying in proportion to the size of the magnetic field. Hall elements are mainly used as sensors to detects motor rotation.

Asahi Kasei is the world’s leading manufacturer of Hall elements, and has developed many new applications by combining Hall elements with signal processing ICs to form Hall ICs that provide highly precise detection of position and angle. We have also pioneered the use of gallium arsenide (GaAs) substrates, which provide substantially improved temperature characteristics and detection accuracy. Hall elements from Asahi Kasei are widely used in home electronics and automotive electronics, where stable operation under severe temperature conditions is required. 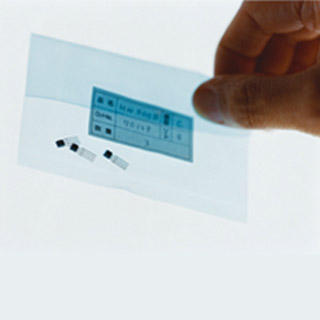 With this innovative, world-leading process, it’s possible to make plastic without oil.

Acrylonitrile (AN) is the main raw material for acrylic fiber and ABS resin, which are commonly used in products all around us. These include sweaters, carpets, automotive parts, home electronics, office equipment, and video game consoles.

AN is conventionally produced using propylene from cracked naphtha, a petroleum derivative. Asahi Kasei developed the world’s first successful propane process for AN production using propane obtained from natural gas. This breakthrough process that avoids the need for oil as feedstock is a testament to the strength of our core technology in catalysts.

This propane process for AN was first used in commercial operation in 2007, at the Ulsan Plant of Tong Suh Petrochemical, a subsidiary in Korea. In the following year, Asahi Kasei and PTT of Thailand decided to jointly construct a propane-process AN plant in Thailand, and the plant started operation in 2011. 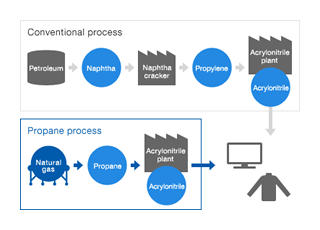 Comfortable and lustrous natural fiber made of cotton linter.

Comfortable and lustrous natural fiber made of cotton linter.

Bemberg™ is the brand name for cupro, the regenerated cellulose fiber derived from cotton linter, the short fibers on cotton seeds. Bemberg™ is easily biodegradable in soil, and it is currently produced only by Asahi Kasei. With its silky luster, moisture absorption/release, and high antistatic properties, Bemberg™ endows garments with a beautiful silhouette and exquisite comfort. Friendly to both people and the Earth, it is used in a wide range of fields such as linings, innerwear, outerwear, interior furnishings, and bedding. 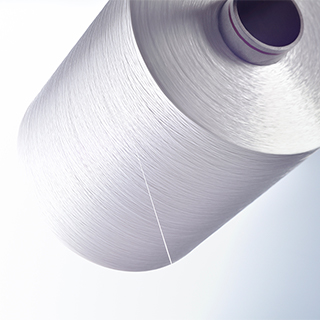 Microza™ is a hollow-fiber membrane filtration system developed by Asahi Kasei. Featuring uniform pore size and pore shape, Microza™ membranes made of special organic polymers are used to purify and clarify liquids by passing the feed liquid through pores in the membrane walls, while blocking the passage of microscopic particles. It is used for water processing and clarification technology in a wide range of fields, including electronics, drinking water supply, wastewater treatment, and power generation, as well as in the automotive and chemical industries, and in environmental preservation applications. 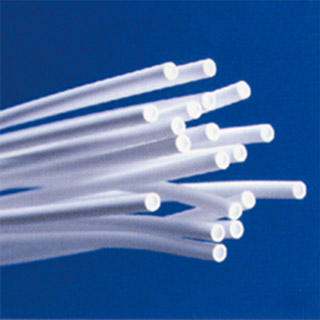 A new source of ultraviolet light for disinfection and sterilization

UVC refers to ultraviolet light with wavelengths between 200–280 nanometers (nm). Light in the UVC wavelength can be used for disinfecting water and sterilizing surfaces, destroying harmful micro-organisms in food products and in air. In the range of 250–280 nm, UVC radiation renders harmful micro-organisms such as bacteria and viruses ineffective, by destroying the genetic information in the DNA. The micro-organisms lose their reproductive capability and are destroyed. The germicidal nature of UV is well suited to treat parasites which are extremely resistant to chemical disinfectants.

UVC LEDs are expected to contribute to safety in various fields. They can be used for water disinfection in homes and factories, surface sterilization of medical devices and food products, and air purification through air purifiers and air conditioners.

Do you know how to help a victim of sudden cardiac arrest?

Sudden cardiac arrest (SCA) can strike at any time. Without AEDs and CPR, the prospects for survival are bleak. Fewer than 10% of SCA victims typically survive, but studies show that 30% to 50% would likely survive if CPR and AEDs were used within five minutes of collapse.1 High-quality CPR is crucial to any rescue attempt, but many lay rescuers have little experience with CPR. The ZOLL AED Plus™ provides real-time CPR feedback on compression depth and rate to help rescuers consistently deliver better CPR.

The AED Plus™ is just one of ZOLL's products in the "Chain of Survival," a sequence of critical actions to rescue victims of cardiac arrest. These include early recognition of the problem, calling emergency medical services, performing immediate CPR, and advanced medical treatment by emergency personnel who arrive at the scene. The survival rate can be dramatically increased by a prompt and appropriate first response by lay rescuers to perform CPR with chest compressions and the use of an AED. 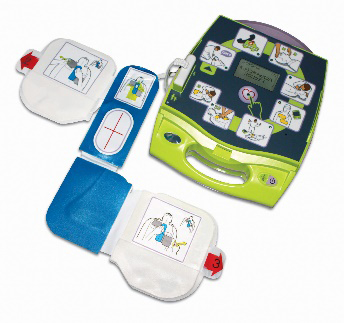 As an engineering plastic featuring excellent heat resistance, impact resistance, dimensional stability, and transparency, polycarbonate (PC) is widely used in various applications including mobile phones, automobile headlamps, home appliances, office equipment, DVDs, etc.
All the conventional processes used carbon monoxide (CO) as starting material, and most of them produced PC in the phosgene process where CO and chlorine were combined to form phosgene, a highly toxic gas, as feedstock material.

There are several serious drawbacks of the phosgene process:

Asahi Kasei achieved in the world’s first successful development and commercialization of a process to produce PC from CO2 as starting material without using highly toxic phosgene. The Asahi Kasei process is an environmentally friendly process epitomizing the concept of Green and Sustainable Chemistry (GSC) by overcoming the drawbacks of the conventional process related to the environment, safety, and cost performance. 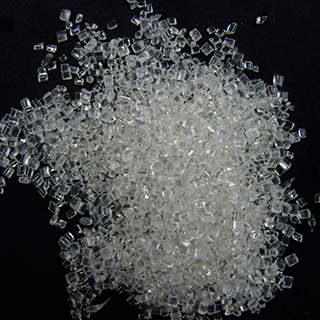